Eartha White and the Creation of Black Historical Memory in Florida 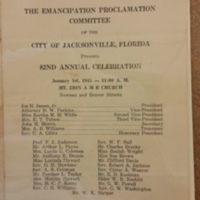 Establishing a collective memory of the past was one way that African Americans could gain a sense of self-worth living under Jim Crow. At the time, little written African American history existed. What did exist was written by white Americans and filled with untrue stereotypes. The subject received little serious study compared to the history of white Americans. By recording and researching their history for themselves, African Americans could contest white narratives that obfuscated the original purpose of the American Civil War and racist stereotypes ascribed to them to diminish and erase black achievements. The black collective memory of the past emphasized slavery and Emancipation's centrality to the Civil War, the importance of African American soldiers in the U.S. military, and overlooked African American leaders during and after Reconstruction. In creating a collective memory, they faced many challenges. They had limited resources available to use for traditional academic and archival research. Without the support of local governments, they had little space for public commemorations as well. Despite these obstacles, African Americans continued to organize to counter the prevailing white narratives in the South through both written and oral histories.

Florida, with its Confederate history and southern culture, was one site of these competing historical narratives, with the city of Jacksonville being no exception. As a leader of Jacksonville's African American community, Eartha M. M. White was in a unique position to organize historical counternarrative efforts. With her connections to local government and skill of persuasion, she could gain approval for events and recruit supporters. White had an interest in preserving African American history and took positions to help her do so. For instance, she took on the role of historian of the National Negro Business League, Booker T. Washington's organization for racial uplift through economic achievements. This exhibit explores the historical projects in which she was involved.

White was heavily involved in continuing efforts to use celebrations, pageants, and other events like the city's 82nd Emancipation Celebration to teach Jacksonville's African American community about its history. Such efforts spread information and "race pride" to the community's poor and illiterate and continued the oral traditions of passing down historical knowledge. Similar celebrations in the city honored business leaders like Abraham Lincoln Lewis, who were instrumental in supporting local efforts to create a black historical memory like the History Society for Jacksonville Negroes. To coordinate other historical preservation efforts, White corresponded with others like J. Henderson and Edward Jones of the Florida Agricultural and Mechanical University through letters to share information. She also wrote a biographical sketch of James Weldon Johnson, whom she knew personally, after his death. Individuals like White often took up historical projects on their own, writing biographical sketches and other pieces of history-writing of varying lengths. Some even wrote long-form manuscripts on the African American History of Florida, such as is the case with Suspense, an academic piece that reflects the growing movement in support of the writing and analysis of African American history in the 1940s. Never content with the little writing that did exist and seeing the need for a larger statewide effort, she and A. Philip Randolph organized and hosted a conference to write a history for the entire state in 1957.

Brundage, W. Fitzhugh. The Southern Past: A Clash of Race and Memory. Cambridge, MA: The Belknap Press of Harvard University Press, 2005.

The Role of the Church in Public and Private Life 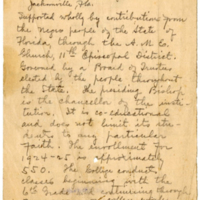 This exhibit provides a brief history of Black churches and examples of the impact those institutions had on public and private life as evidenced by selected items from the Eartha M. M. White Collection, Special Collections and Archives at Thomas G. Carpenter Library, University of North Florida.

“Not For Ourselves, But For Others": African American Women Organizing and Leading in Jacksonville, Florida, and the United States 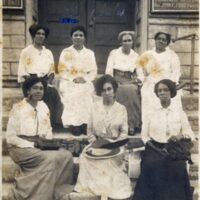 Many would say that Eartha M. M. White was a prominent African American female leader in Jacksonville. However, what do people mean when they call her a “leader”? How did the primarily elite and middle-class African American women that supported Black America before the Civil Rights Movement view their activities and work? What did leadership and organizing mean to them? This exhibit explores several ways black women in Jacksonville and the United States more broadly supported their local communities, negotiated new boundaries to gendered behavior, and worked together to contribute to the black freedom struggle in the United States.

Black women’s work within the church laid the foundation for their efforts to support their local communities through humanitarian aid. Club work was a more secular extension of women’s service, providing official leadership opportunities within national, state, and city organizations like the National Association of Colored Women. In matters of educating the youth and providing an alternative black legacy within a discourse dominated by racist ideas, black women served in important roles as educators and historical preservationists. To work towards racial equality, black women played the role of diplomat negotiating better representation and treatment within American politics. Often at the same time, they worked as political agitators employing direct action and focused campaigns to achieve specific goals.

Ortiz, Paul. Emancipation Betrayed: The Hidden History of Black Organizing and White Violence in Florida from Reconstruction to the Bloody Election of 1920. Berkeley: University California Press, 2005.